Our apartment in La Napoule, a privileged place in line of the excellence of Cannes
The holiday apartment overlooking the sea that we propose in La Napoule has a privileged location at the southwestern end of the Bay of Cannes called the Gulf of La Napoule, just 7 kilometers from the city center of Cannes. As you can imagine we are in one of the most beautiful places on the French Riviera. In this part of the bay, the sea is almost always calm because the site is sheltered from the winds by the mountains of Esterel. This exceptional strategic situation has become today an advantage for the quality and the pleasure of your stay and your holidays.
Napoule, an old village in Provence with an original and eventful history
In the Middle Ages, in the twelfth century, Epulia had only a few fishermen's houses. Later in the fourteenth century Epulia takes the name of La Napoule. The village has had a turbulent history related to lust inspired by its protected site, hyphen between the sea and inland. In 1530, the pirate Keir-ed-Din also named Barbarossa, attacks and robs La Napoule. The village and castle on the sea were destroyed and rebuilt several times over the centuries ...
Since 1970, La Napoule and Mandelieu are part of a single community Mandelieu La Napoule, formalizing a common history of many centuries. After sea bathing was made fashionable by the English and Russian aristocracy in the nineteenth century, Mandelieu La Napoule - adjacent to Cannes -  became a popular resort and the capital of mimosa. Its coastline consists of sandy beaches and coves accessible all year along the slopes of the Esterel mountains and the famous Gold Corniche. 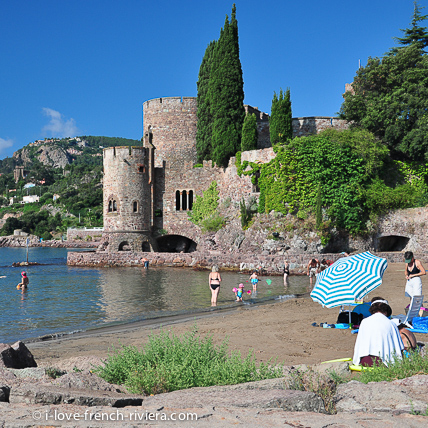 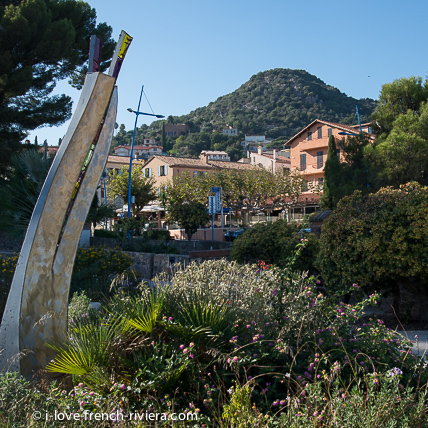 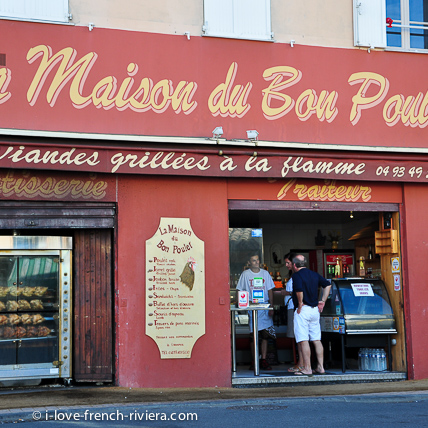 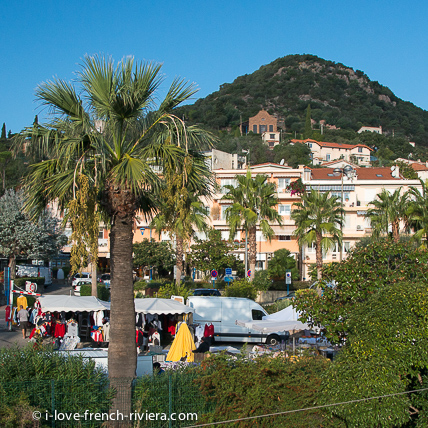 A little market is held on Thursdays 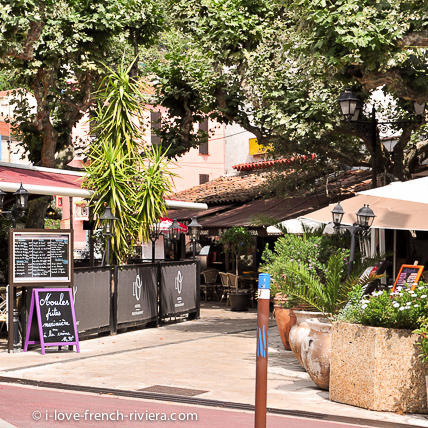 A hundred yards from the apartment, this shady path leads to the train station and has several terraces and many nice restaurants. 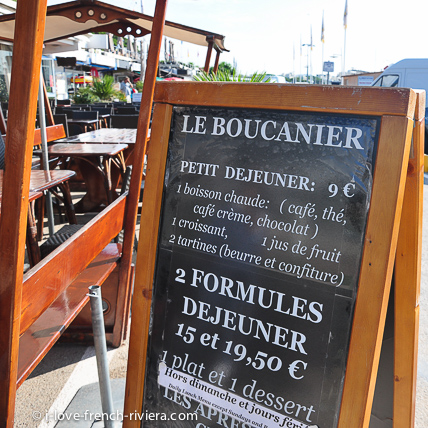 On the sea shore and marina facing the apartment you can have breakfast.

Mandelieu La Napoule and its 7 beaches
Mandelieu-La Napoule coastline spreads along three kilometers and offers swimmers 7 sandy beaches accessible all year round. These beaches are sheltered from prevailing winds. They are secured and marked. Surveillance and maritime safety are ensured by municipal police officers. In summer bathing water samples are taken and analyzed daily. 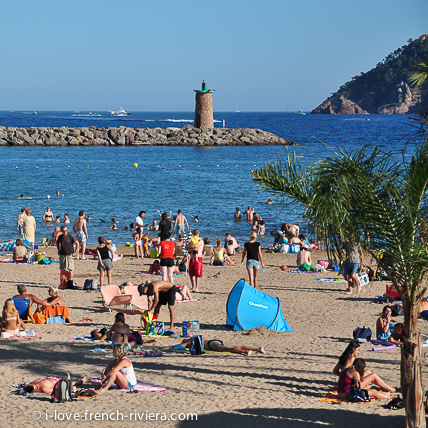 A nice clean and well sheltered beach is right outside the apartment, next to the castle. 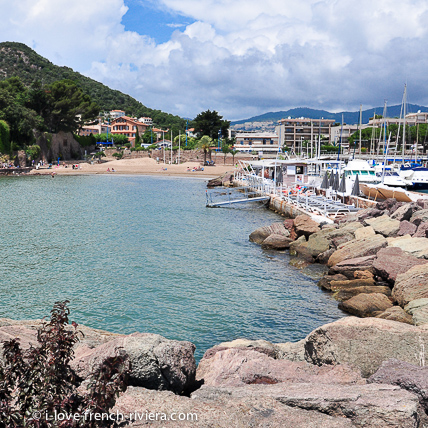 In season, you can also rent beach chairs and enjoy a private jetty.

The nearest beach to the apartment is that of the castle which is just opposite. Small beaches Rague and Raguette are within a fifteen minute walk through a nice and easy trail that runs along the seafront castle. It is climbing some beautiful rocks offering lovely views of coves with red rocks formed by the slopes of the Esterel along the famous Gold Corniche. This is my favorite walk at sunrise. It is quiet and the views are stunning. In the distance, especially in winter, the snow-capped Alps dominate the skyline. Some fishermen go out with their boats ... In short, the show is beautiful ... 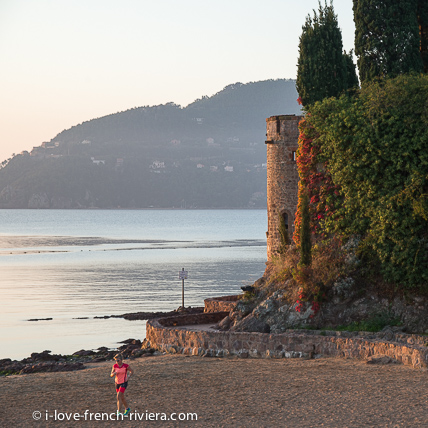 Between the beach and the castle begins the waterfront trail 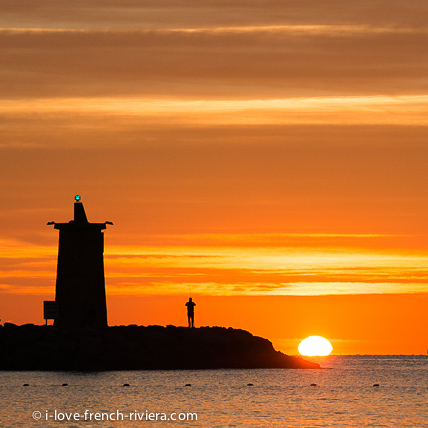 From sunrise to sunset, the views are sublime ... 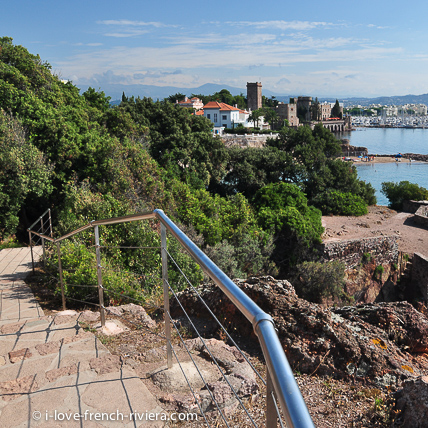 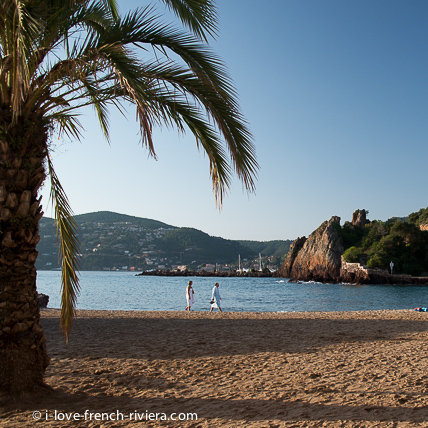 And leads to small sheltered coves. It is nice to go in the morning.

The marinas of La Napoule
The level of port facilities is exceptional in Mandelieu la Napoule, with more than 5,000 seats in seven ports entirely dedicated to pleasure! Deep water ports in the sea or river, or dry dock filling out the local port device, all boaters are in Mandelieu best suited to their form of boating.
The largest marina is located just in front of the residence. You see it from the terrace. Many restaurants are located along the waterfront. It's a nice walk, even if you do not have a boat.

Traditionally held in Spring, the used Boat Show opens the boating season. Only exhibition dedicated to the occasion in the Mediterranean its success is confirmed every year thanks to ideal positioning during Spring holidays, which sees the arrival of thousands of visitors and gives boaters the opportunity to test early in the season their new equipment. Since its creation in 1991 by the brokers in Port La Napoule, the Mandelieu La Napoule show for used boats brings together many professionals each year with more than 300 boats. 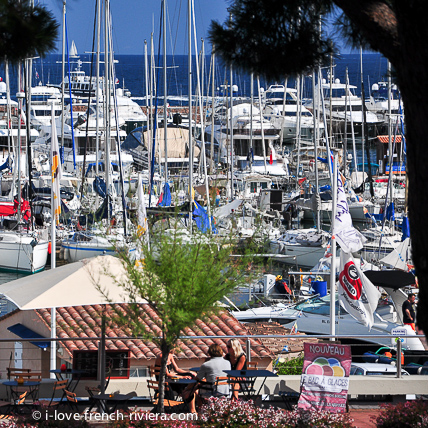 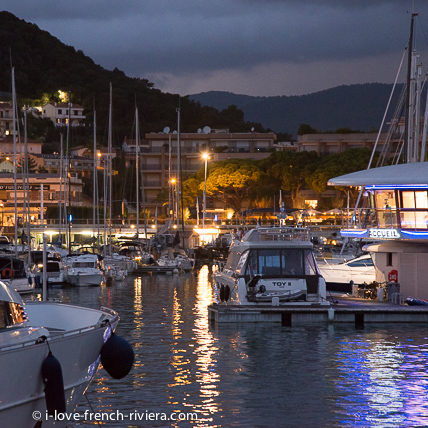 The castle of La Napoule, 600 years of turbulent history ...
In the Middle Ages, in the twelfth centuries Epulia (La Napoule) had only a few fishermen's houses. The first castle was built on top of Mount San Peyre, a volcanic cone that dominates the coast from a height of 137 m. Following a feudal war, the castle of Mount San Peyre was destroyed in 1387. The Villeneuve family who owned it, built in Epulia a new castle, exactly 600 years ago (1415) and the village Epulia took the name La Napoule.
In the Middle Ages they kept watch day and night on the castle towers and people were doing the same at the gates of the city to fight against attacks that could come from the sea. An old text specifies that the castle near the sea was used to defend the village against the "Moors of Africa." It was 5 centuries of turbulent history and struggles against pirates and invaders from the sea who coveted this privileged site.

In 1918, two American, Henry Clews (1876-1937) and Elsie Whelen, called Marie Clews (1880-1959), settled in the remains of the medieval castle that they have acquired in November 1918. Henry Clews, son a new York banker, had inherited a large fortune. With their wealth, the couple could restore the buildings, bringing their personal touch (Henry was a sculptor and Marie an architect).

The castle gardens designed in 1919 consist of the main garden which opens with a large driveway to the French and three small gardens: the garden of La Mancha, the terraces of the sea and the secret garden. The driveway, the pool, the fountain, the well and buildings that dot the gardens, concierge, chapel, garden tower, pergola and garden bridge are historic monuments. The garden was awarded the Outstanding Garden label by the French Ministry of Culture in 2005. 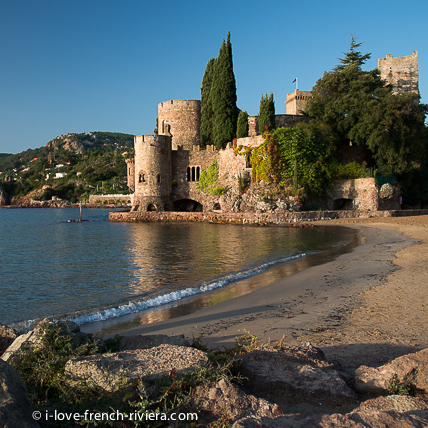 The castle of La Napoule is reflected in the calm waters of the Gulf for 600 years. 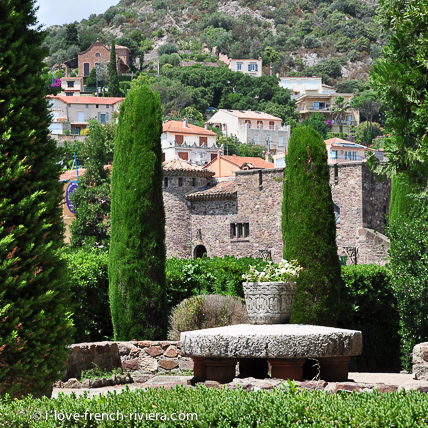 The castle of La Napoule has beautiful gardens 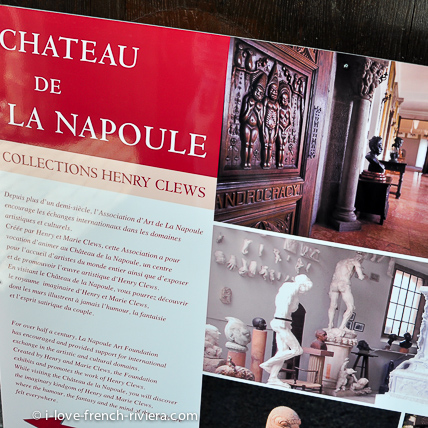 The castle of La Napoule is now a place of contemporary art exhibition. 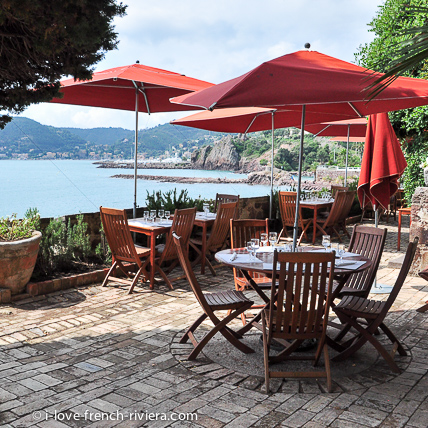 The castle houses a tea room overlooking the sea, an extraordinary site.